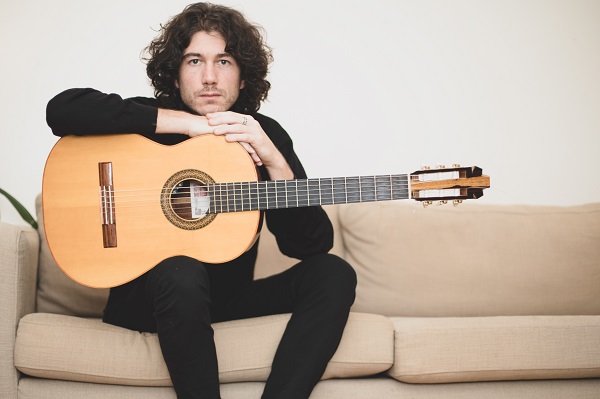 Andreas Arnold "From A to Z"

The guitarist/composer who consequently pursues his own sound somewhere between jazz and flamenco has released four albums of original music to date. He will be presenting his first solo album "From A to Z" (release August 2022). Born and raised in Germany, Andreas currently lives between Brooklyn, NY and Cadiz, Spain. He has collaborated with iconic artists Carles Benavent and Hermeto Pascoal and performed on five continents in venues including the Kennedy Center, Blue Note NYC, United Nations and Sunset Paris.

Andreas Arnold expresses himself through a musical kaleidoscope that reflects the classical traditions of his homeland Germany, jazz from the US where he has lived for the last decade, and music from the Mediterranean, in particular the Spanish art form of flamenco. Through this unique fusion, Arnold proves that purity is not defined by any one culture or style but transpires when one finds his voice to express his personal experience in society, art, and life.

While living between New York City and Andalusia, Spain, Arnold has participated in numerous productions as an instrumentalist, composer, improviser, and producer, touring on five continents. On his new album Ojos Cerrados he was accompanied among others by Carles Benavent, legendary and longtime bass player of Paco de Lucia. He is the musical director for internationally-renowned Jordanian singer Farah Siraj amd for the New York Flamenco Jazz Project.

Jeremy Smith is a percussive artist whose unique versatility allows him to move seamlessly among numerous musical worlds. While the foundation of his playing comes from his classical training at The Juilliard School, his interests lie in a wide range of folkloric and modern percussion traditions from around the globe such as those found in South America, Africa, India, Spain, the Middle East, and jazz. In 2016 he was invited to the International Percussion Festival in Seoul, South Korea as a solo world percussion concert artist. In the Fall of 2017 he toured the U.S. with The Knights chamber orchestra featuring guest artists Avi Avital and Kinan Azmeh. He performs and tours regularly with the exotica global jazz quintet Mr. Ho’s Orchestrotica, as well as handpan artist Adam Maalouf and his project Future Tribe. He has also performed and/or recorded with artists such as New York Gypsy All-Stars, Jorge Glem, Andreas Arnold, Terraza 7 Big Band, Zashaz, Festejation, La Pachamambo, GLANK, Aimua Eghobamien and many more. As a passionate educator of hand percussion, Jeremy has presented clinics and classes at the University of Michigan, Columbia University, and Bowling Green State University. He also meets regularly with students from around the U.S. via Skype or live at his home New York City.

Limited in-person seats:  $25 / $10 full-time students with valid ID
Proof of COVID-19 vaccination required at door
In-person attendees receive a link to the recording to view for one week.
Ticket sales end 1 hr before showtime; tickets can be purchased at the door if any remain.

Streaming  Cost is $15
The link will be revealed to live stream participants 15 minutes before the show
and will remain active through Aug. 24

“These pieces work their original magic by stealth and a sometimes scintillating virtuosity...Arnold brings a fluidity and openness to the form that no doubt derives from his jazz background. He leads with assuredness and an organic sense of rhythm, but also creates ample breathing space in his songs.” - Songlines (UK)