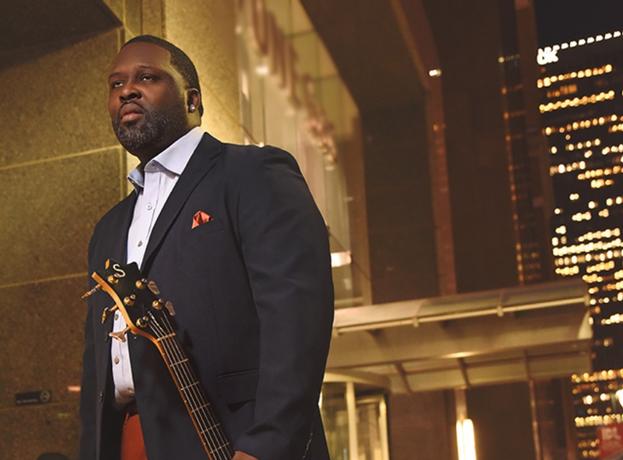 The wait is over Michael Anthony Fields, Jr. has finally emerged on to the music scene with his smooth and exhilarating bass playing. He has made his mark on the smooth jazz world with his remake of Frankie Beverly & Maze's Cant Get Over You. Once a member of the smooth jazz band Soultry Sound, Michael has set to embark on his musical journey and to take it to a higher level. After graduating from South Robeson high school in 2001, Michael attended college at World Harvest Bible College in Coloumbus, OH where he played for world renowned TV evangelist, Rod Parsley from 2001-2003. He then continued his education in Oklahoma at Oral Roberts University where honed his skills in recording and production programming. Now the CEO of his own music production company, Water From The Rock Productions, Fields has produced projects from R&B and Smooth Jazz to Traditional and Contemporary Gospel. As a bassist, he has performed with such notable names as: Marcus Miller, Tom Brown, Ronnie Laws, Wayman Tisdale, Peabo Bryson, Tom Braxton & Jonathan DeBose Jr. among others. Now residing in Tulsa, Oklahoma, Fezee as he’s known to his friends is hard at work producing a self-titled project called “Mr. Fields” featuring his bass playing skills along with local and nationally recognized musicians. He also is producing a project entitled, “Don’t Let the Moment Pass You By” for gospel jazz saxophonist Jermaine Mondaine, which also features local and national recognized musicians. Lastly, he is producing the 3rd gospel recording for National Recording Artist Sarah Nicole. All three of these projects promise to be industry changers! The North Carolina Native has been inspired tremendously by the music of the late great Wayman Tisdale. As he begins his solo career Michael Fields Jr will definitely be a name you wont forget!