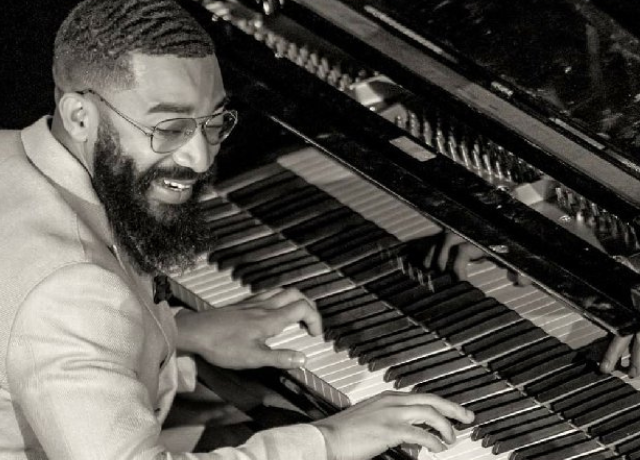 Pianist Kenny Banks Jr., a resident of Atlanta Ga, has earned a reputation as one of the most dynamic jazz artists in the Southeast. Kenny was heavily into music at an early age and started playing music in church at age twelve. Kenny, the Columbus, OH native Inherently shared an interest in jazz. He began his studies by attending music camps, performance arts schools and participating in programs/workshops such as the Vail Jazz institute. Still in high school, Kenny began traveling abroad as a member of the CYJO, performing in theaters and elite jazz venues across the globe. Kenny’s love and drive for music continues. Most recently, he became a finalist in the 2019 American Pianists Awards jazz competition, in which he performed to great acclaim in solo and trio formats.

Kenny feels most comfortable in solo and trio formats, performing original music. He is noted for his blended technique in mixing jazz and gospel styles. Downbeat Magazine describes his playing as  “gospel and blues-infused” and calls his arrangements “thrilling, modern and surprising.” Jazziz Magazine notes his “deeply embodied gospel and soul roots” with “supple phrasing and effortless command of late 20th century harmony.”

Kenny Banks Jr expresses himself compositionally from a broad range of music. KJO’s Live at Lucille’s states, “His music is at once sophisticated, spirited, spontaneous and brilliantly executed.” “Embrace the sound,” says Kenny. “This way of thinking aids me in my approach, keeping me open minded and helping me to view situations from a state of optimism, on and off the bandstand.”