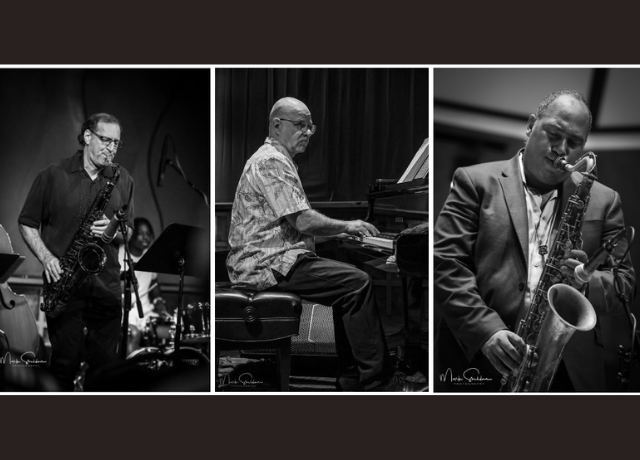 The Cohen-Rutkowski Project is a high-energy acoustic jazz ensemble featuring original compositions that pay homage to jazz icons such as Herbie Hancock, Kenny Garrett and Pat Metheny. Listeners have drawn comparisons to the compositionally-oriented Dave Brubeck group, groovy hard-bop groups such as The Jazz Messengers as well as genre-expanders like the Roy Hargrove Quintet.

The Cohen-Rutkowski Project is co-led by Rich Cohen and Chris Rutkowski. Saxophonist Rich Cohen, originally from the east coast, relocated to the midwest for postdoctoral work in Physics at Notre Dame. Having been bitten by the jazz bug at an early age, Rich’s avocation has always been music, while his day job morphed from teaching Physics to developing help systems for software applications. Since relocating to the Indy area, Rich has continued to hone his musical craft, working with a number of established jazz artists such as Rob Dixon, Everett Greene, and Clifford Ratliff, as well as fronting the Avenue Indy Jazz Quintet with Jeff Conrad.

Pianist and composer Chris Rutkowski's life in jazz has its unlikely beginnings in London, England, where he had completed a degree in Philosophy, but it flowered in the artistic hot house of Detroit. Quickly connecting with the legendary trumpeter Marcus Belgrave, he wrote for and performed with his big and small bands.  A lengthy turn toward the world of classical composition involved graduate study at Indiana University, which in turn lead back to jazz with study and performance with the great David Baker. Both worlds flowed concurrently, while he performed with luminaries such as Motown's Temptations, Darmon Meader (New York Voices), saxophonist Eric Alexander, and trumpeter Alan Vizzuti.

Special guest Rob Dixon is a nationally recognized jazz saxophonist who has toured both nationally and internationally. A native of Atlanta, Rob went to Indiana University where he came under the influence of the renowned jazz educator     David Baker. After moving to New York, he worked with other up-and-coming musicians like the trail-blazing drummer Ari Hoenig, subsequently spending four years as a member of Illinois Jacquet's big band, followed by membership in a group co-lead by the legendary bassist Rufus Reid. Since moving back to Indianapolis in 2003, Rob has established himself as arguably the most in-demand musician on the Indy jazz scene, performing and recording extensively with such notable artists as Derrick Gardner, Steve Allee, Mike Clark, Charlie Hunter, the Buselli-Wallarab Jazz Orchestra, and the late Cynthia Layne, as well as recording three albums as a leader. In addition to performing and recording, Rob is the artistic director of Indy Jazz Fest and is actively involved with jazz youth education.