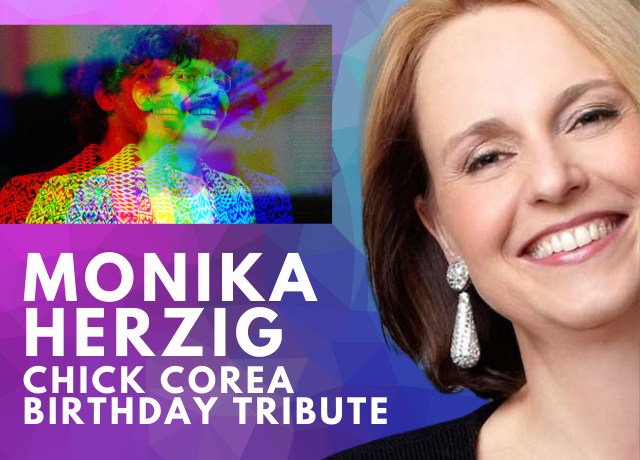 NEA Jazz Master Chick Corea was born June 12, 1941 in Chelsea, MA – unfortunately we lost him to cancer on February 9, 2021, just four months shy of his 80th birthday. With 25 Grammy awards and 60+ nominations, he is the 6th most awarded artist in history and the #1 jazz artist. His group Return to Forever brought the excitement and virtuosity of jazz fusion to worldwide audiences and compositions such as Spain, La Fiesta, 500 Miles High, and Windows are standards beyond the jazz genre. His prolific output spans electric and acoustic groups, solo piano, classical concertos, duo collaborations with Herbie Hancock, Gary Burton, Bobbie McFerrin and so much more. Chick Corea was versatile, prolific, charismatic, and visionary in true Gemini fashion. But most of all his pure joy of creating music and playing piano was what inspired jazz pianist and author Monika Herzig to study his music and compile the 2017 Listener’s Companion Experiencing Chick Corea (Rowman & Littlefield). She will lead an all-star group of musicians in a joyful celebration of Chick Corea’s music on the day of his 80th birthday, June 12, which also happens to be her own birthday. Experience the joy of Chick Corea’s music with

Jazz pianist Monika Herzig has completed her Doctorate in Music Education with minor fields in Jazz Studies at Indiana University, where she is now a faculty member in Arts Administration. She is the author of “David Baker – A Legacy in Music” (IU Press), andExperiencing Chick Corea: A Listener’s Companion  (Rowman and Littlefield, 2017). She is also the head of the research committee for the Jazz Education Network and editor of JAZZ (Jazz Education in Research and Practice, IU Press).

Groups under her leadership have toured the world and opened for acts such as Tower of Power, Sting, Dixie Dregs and more. Her awards include a 1994 Down Beat Magazine Award for Best Original Song, a Jazz Journalist Association Hero 2015 award, as well as grants from the NEA, the Indiana Arts Commission, MEIEA, Jazz Tours, the US Embassy among others. Her newest project “SHEROES” features the world’s leading female jazz instrumentalists and was recently featured on NPR’s Here and Now as well as cited as one of the best releases of 2018 in DownBeat Magazine, placing #31 on the year-end Jazz Week Charts. Thomas Garner from Garageradio.com writes, “I was totally awed by the fine musicianship throughout”. The group was the featured guest at Egypt’s Jazz Tales Festival followed by a tour of Europe’s most prestigious jazz clubs including Vienna’s Porgy & Bess and Munich’s Unterfahrt. Monika is a CASIO Artist.