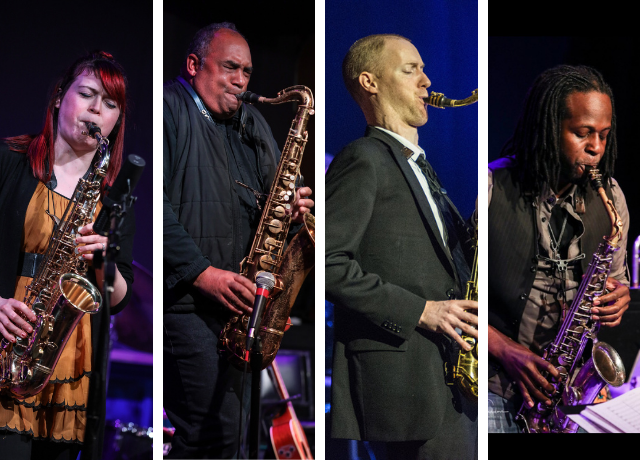 Rob Dixon has gained significant  recognition throughout Indianapolis (often referred to as the Musical Mayor of Indianapolis) and the greater international jazz scene through his performances with the Count Basie Band, Tony Bennet, Slide Hampton, The Smithsonian Jazz Masterworks, Mike Clark, the Headhunters, Charlie Hunter, and his own groups Triology and the Indianapolis Jazz Collective.

LaMont Webb has become a staple in the Indianapolis jazz scene, performing regularly with the Ryan Taylor Quartet,  the Sean Imboden Large Ensemble, and  the Cassius Goens III Quartet. Praised by the Indianapolis Jazz Foundation President Katherine Nagler as one of  “the best and up and coming players,” LaMont Webb was the 2016 recipient of the Foundations prestigious Fellowship for an emerging Indiana artist.

Sean Imboden began his professional career performing for Broadway productions including Hairspray, A Chorus Line, and Young Frankenstein. Since then, he has also performed on Late Night with Jimmy Fallon and with the Radio City Music Hall Orchestra, the Indianapolis Symphony Orchestra, Aretha Franklin, The Temptations, the Tucker Brothers Group, and his own band the Sean Imboden Large Ensemble.

For their return to the Jazz Kitchen, the Indy Saxophone Quartet will be joined by Jesse Wittman on bass and Cassius Goens III on drums.