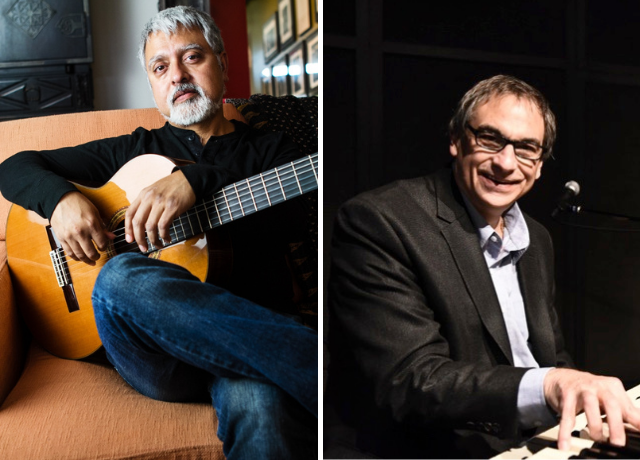 Fareed Haque has spent much of career defying expectations of what the jazz guitarist is supposed to do and sound like. Recently, Haque has been tackling one of the most iconic and enduring contexts for his instrument, collaborating with Hammond B-3 master Tony Monaco in a hard-hitting organ combo.
Organist Tony Monaco from Columbus, Ohio, whose reserves of energy match the guitarist’s, studied with greats Hank Marr and Don Patterson but his greasy, rambunctious style owes serious debts to the great Jimmy Smith. His playing goes head-to-head with Joey DeFrancesco at his most extroverted.

Fareed Haque is a modern guitar virtuoso. Steeped in classical and jazz traditions, his unique command of the guitar and different musical styles inspire his musical ventures with tradition and fearless innovation.

Since 2011, Haque has returned to his first loves, jazz guitar and classical guitar. He has been busy performing and recording with his trio featuring legendary B3 virtuoso Tony Monaco, his own trio and jazz quartet, as well as his larger world music group the Flat Earth Ensemble.

Tony Monaco may be the best organ player you have yet to hear of flying stealth while playing arguably some of the hottest B-3 around. Mentored by the legendary Jimmy Smith in what is considered the more classic style, Monaco does not swing, smolder or smoke. "Tony Monaco burns is this most fitting!" CriticalJazz Review2012. Tony Monaco began his keyboard life at age eight. When he was twelve, his destiny as a jazz organist was sealed when he first heard Jimmy Smith. An enthusiastic student, Tony began working in Jazz clubs as a teenager in his native Columbus, Ohio, guided by local organ gurus Hank Marr and Don Patterson. Four years later, Jimmy Smith invited Tony to come play at his club in California, a peak lifetime experience for Tony.

In April 2000, Tony met fellow jazz organist Joey DeFrancesco, who offered to produce a debut CD for him. This collaboration resulted in the critically acclaimed "Burnin Grooves”. The international success of the recording served as the catalyst for regional and national tours. Tony has since released 8 International releases and toured around the globe many times. Tony also toured and recorded with Pat Martino for over two years! As an ardent student of the organ, it's no surprise that Tony is an accomplished teacher as well. In addition to private students, classes and clinics, Tony has produced a series of instructional DVDs titled "Playing Jazz Hammond" that have become indispensable for many serious students of the organ. Tony continues to expand his catalogue using most update technologies. He developed a system of giving lessons one on one online and gives lessons to students around the globe!  His passion for teaching allowed him to secure  his "Artist in Residence"  status at Hope College in Holland Michigan where he teaches students both online as well as regular workshops groups and one-on-ones at the College. Tony is very proud and excited to be releasing his 11th international CD "The Definition of Insanity" on Chicken Coup Records January 2019!  Featuring Jam, Funk, Vocals, Italian Traditional and Latin with his current Trio ! Presently, Tony maintains a very busy schedule that includes festival appearances , clinics, and workshops.