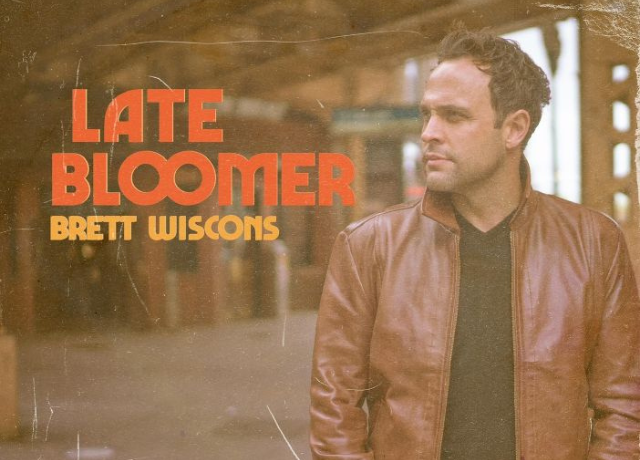 Sometimes, the most difficult circumstances offer a silver lining. One has to look for it, but it’s there, ready to be discovered. Indiana-based singer, songwriter, and five-time author Brett Wiscons felt that reality all too keenly when the pandemic made for unique and trying times to put together his forthcoming album, Late Bloomer, and the silver-lining mentality ended up permeating the songs on the record. “I just wanted to offer hope in a seemingly hopeless situation,” Wiscons says of the genesis for this album. “These songs wouldn’t have existed without the kindness of my Kickstarter backers, and I wouldn’t have written some of them if it hadn’t been for the global pandemic.”

His new full-length album, Late Bloomer, was a labor of love created with mix engineer, producer and collaborator Thom Daugherty (The Elms, The Band Perry), and it will be released on July 13, 2022 via Wiscons’ own label, MAD Diamond Entertainment.

“Well before the pandemic hit, I had an idea for a song called ‘Late Bloomer’ in May of 2019” Wiscons recalls. “I told Thom about it and he, almost without thinking, said, ‘I have a chord progression that will work for that song idea.’ I then wrote the lyrics on a plane. They just poured out of me. I am a late bloomer, and I figured many other folks out there might be able to relate to this song.” “Late Bloomer” was released as a single in February 2020, mere weeks before everything shut down, but the track garnered Wiscons new fans from as far afield as Australia, Morocco, and the UK, to name a few places where other “late bloomers” chimed in to let Wiscons know how much his song resonated with them. In July of 2020, “Late Bloomer” appeared on the soundtrack for the new “NASCAR Heat 5” video game on Xbox and PlayStation.

With the song out in the world, Wiscons and Daugherty had huge aspirations to record a full album by the same name. “I knew it had to be done, but I knew it was going to be expensive to produce,” Wiscons says. “I’d had success with Kickstarter before, so I ran a campaign and hoped for the best.” What happened next blew Wiscons away. “Somehow, 137 people scattered around the country believed in me and this project, and we raised over twenty-two thousand dollars and were completely funded two weeks into the 30-day campaign.”

Wiscons and Daugherty had planned to get to work in mid-March of 2020, but the pandemic had a little to say first. “We were so eager to get rolling, but then, quite literally, like the rest of the world, we got shut down,” Wiscons remembers. By May 2020, they started working remotely, writing lyric and song ideas and passing them back and forth via text and email while communicating through the Marco Polo app. Two of the collected songs were directly influenced by the pandemic and lockdown itself: “Walk Talk” and “Vertical City.” “I was feeling all sorts of emotions during that time; anxiety, fear, doubt, and worry seem to be the ones that stuck around the longest, at least initially, but then hope started to emerge. Seeing news footage of a desolate New York City with empty streets and sidewalks was the beginning of the song ‘Vertical City.’”

News topics and emotional responses laced other tracks, and the songwriting pair also tackled what happened to George Floyd in Minneapolis (“When You Can’t Breathe”), parenthood (“Let’s Do it Again”), and wishful thinking (“French Café”). There are shades of The Beatles, Pearl Jam, Eagles, Jackson Browne, and Hootie & the Blowfish but with Wiscons' unique spin on things making it fresh + new.