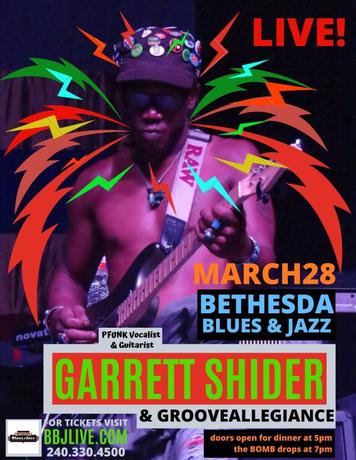 Garrett Shider is the current lead vocalist and rhythm guitarist for the seminal funk band Parliament-Funkadelic touring the globe for the last eight years.  He is the son of legendary P-Funk lead vocalist and guitarist Garry Shider known as Starchild and Diaper Man while Garrett is known as Starchild Jr. born on the Mothership. He wrote songs for the first Funkadelic album in over 30 years, "First Ya Gotta Shake the Gate", released his debut solo album "Hand Me Down Diapers" and his latest album "Regurgitated Youth."

This special show features the band Groovallegience, a 13 piece funk ensemble featuring two guitars, two keys, three horns, three background vocalists, drums, bass and Garrett. They will be performing Garrett's songs from his own albums including his new anthem "I'm A Funkadelic."  Garrett Shider & Groovallegience will deliver the funk, the whole funk and nuthin' but the funk by the next generation of P-Funk!