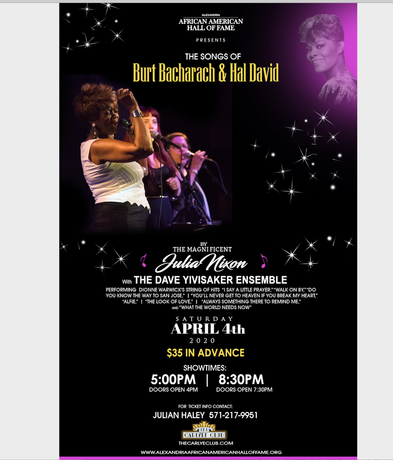 The wondrous songs of Burt Bacharach and Hal David were first burned into our hearts during the 60’s and early 70’s. Their utterly distinctive and riveting take on pop music earned them more than 50 hits at the top of the charts, where they were perched for 10 years. The string of hits—“I Say a Little Prayer,” “Walk On By,” “Do You Know The Way to San Jose,” “You’ll Never Get To Heaven If You Break My Heart,” “Alfie,” “The Look of Love,” “Always Something There To Remind Me,” and “What The World Needs Now”—poured out over more than a decade and found the greatest singers of the day, most notably Dione Warwick but also Dusty Springfield, Jerry Butler, Aretha Franklin, & others lining up to sing the next Bacharach-David smash.  Bacharach’s music is known for its dramatic chord changes, jazz voicings, and tricky rhythms all cleverly disguised within some of the catchiest melodies ever sung. David’s smart and graceful lyrics are notable for their honesty and subtle wit. Bacharach and David have received the Gershwin Prize, the Kennedy Center Honors, and are in the Rock and Roll and Songwriters Hall of Fame.