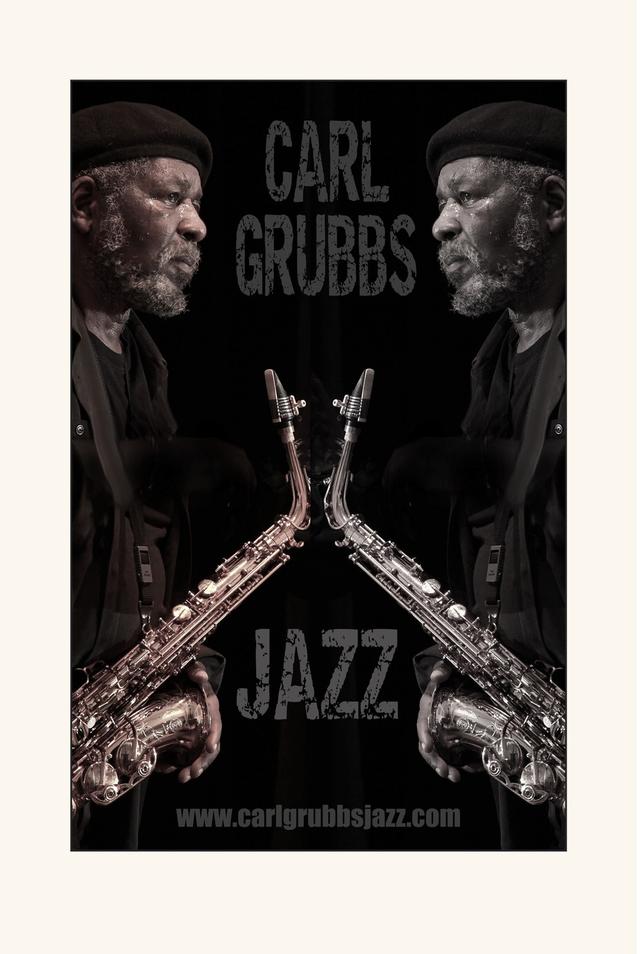 "The quartet takes the tonal centers of Trane’s “Giant Steps”? as their shared springboard. Grubbs solos first, crafting a highly personalized tribute to the composer through a verbose series of high register note streams . . . bouts of impressive circular breathing in solo and tandem, but the extended reed techniques never compromise the musicality of their endeavors. 'July' features the full quartet galloping through another of Grubb’s melodically charged creations Miles Davis’s 'Four'? supplies further fodder for spirited blowing and the quartet attacks the bop standard with a voracious improvisatory elán." – Derek Taylor, Cadence Magazine

“Grubbs opened the main show by lifting his alto saxophone and exploding into hot Latin riffs of his composition “Bossa.” His fierce blowing on “Saturn,” one of his signature tunes, was a highlight, and “Barbara Dear” featured tenderly blown harmonies by Grubbs on a tune honoring his wife.
– Steve Monroe, Baltimore Jazz Alliance

CARL GRUBBS is a legendary jazz saxophonist with a distinguished career as a performer, composer, music educator and recording artist. He performs on alto, soprano and tenor saxophones and clarinet.

Early in his career, he received extensive training from one of the music world’s greatest legends in jazz, John Coltrane. Through his family, Carl Grubbs was close to many of the history-making musicians of the 1950’s and 1960’s. With his brother, Earl Grubbs, he formed The Visitors, a quintet that recorded four albums for the Muse record label.

The Carl Grubbs Ensemble has performed his original compositions and jazz standards in cities in the USA, and they have performed at jazz festivals in Bogota and Medellin, Columbia, S.A. and most recently an eight-city tour of Brazil and other major cities world wide. Mr. Grubbs is a former member of the Julius Hemphill Saxophone Sextet.  This group toured the U.S. and Europe performing two productions: Hemphill’s Long Tongues: A Saxophone Opera and Bill T. Jones/Arne Zane Production: Last Supper at Uncle Tom’s Cabin: The Promised Land. Mr. Grubbs was a guest soloist at the Philadelphia performance of Reggie Workman’s project, African Brass, A Tribute to John Coltrane. He has performed with Odean Pope’s Saxophone Choir at the Blue Note in New York City. The Philadelphia Jazz Project (The Painted Bride) commissioned a new arrangement of his composition “In My Youth” for jazz/string ensemble for inclusion in its annual “Frosty 2” event.

Mr. Grubbs has received numerous awards in recognition of his work. He has twice been the recipient of the MSAC Traditions award as a jazz master, working with apprentices to pass on the traditions of improvised jazz music. His organization, Contemporary Arts Inc. received a 2009 MSAC Traditions Project grant that culminated in his collaboration with Lafayette Gilchrist in a CD of the music of Marylanders who made significant contributions to the art form of jazz. In 2009, Mr. Grubbs received the Mary Sawyers Baker Award from the Greater Baltimore Cultural Alliance and William G. Baker, Jr. Memorial Fund. In 2014, he was awarded a Rubys Project Grant from the Greater Baltimore Cultural Alliance, founded by the Deutsch Foundation. His Rubys Project Grant enabled him to revise and expand his original work, The Inner Harbor Suite Revisited: A Tribute to Baltimore for Jazz/String Ensemble.

Mr. Grubbs is co-founder and Artistic Director of Contemporary Arts Inc. a nonprofit arts organization. The organization’s jazz programs provide music and dance education for youth ages 4-17, jazz concerts at senior centers and concerts for general audiences. Carl Grubbs is a member of the MSAC Arts in Education Artist Roster.